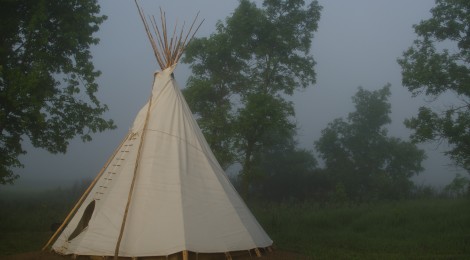 The word “Tipi” comes from Lakota language, means “dwelling”.  Lakota is one of the nomadic native American tribes who lived in the great plains of North America.  Tipis work well for nomadic tribes due to its portability characteristic, it can be disassembled quickly when the tribe decided to move away and it can be easily reconstructed back upon settling in a new area.

Tipi is one of the accommodation options at some of Minnesota State Parks nowadays.  Minnesota State Parks purchased tipis from tipi builders, built composite wooden platforms for its base, and assembled the tipi.  There were approximately three to four tipis per state park for rent.  If you are eager to stay in a tipi and experience the lifestyle inside a tipi, I would recommend you to search for state parks that offer tipi for accommodation, reserve a tipi for a night, and see how it works for you. 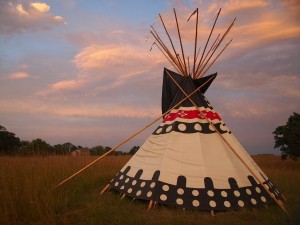 We arrived at Blue Mound State Park at 10 p.m., it was dark and wet due to the rain. We couldn’t find our tipi and obviously, the state park office was closed.  We were lucky to find a park ranger who patrolled around the state park that night.  The ranger mentioned that they moved our tipi to a new location because they were adding more tipis in the state park. The state park planned to group all tipis in one location instead of scattering them around the camp sites.  Unfortunately, the park map was not updated on time.

Condition:
The first thing I did when we reached the reserved tipi was I immediately went inside to check out the condition.  Unfortunately, there were dust and wet sands on the platform.  The floor was not cleaned and covered by plentiful of wet sands.  The rain canvas was probably opened when it rained.  As usual, the park provides one broom inside the tipi.  I swept the floor before we settled down.  However, you know how tough it is to get rid of wet sand with a broom, most of them stayed. 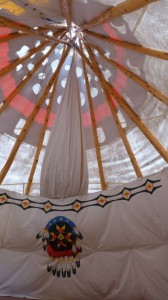 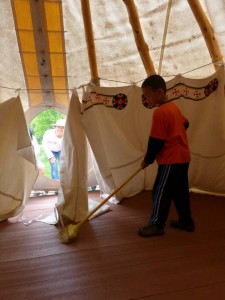 Bugs:
After we settled down, we noticed bugs came in from the holes and openings to “welcome us”.  We had some unwanted guests and roommates that night.  But, luckily, the temperature was cool enough at night to keep most of the bugs away from the tipi.

Weather/rain:
With the rain, we got pretty good coverage from the second layer of the canvas inside the tipi, which was purposely designed to keep the rain water away.  However, the inner canvas did not quite direct all of the rain water away properly.  We got some water droplets near the edges of the tipi.

Capacity:
A tipi should be able to hold six people; however, with the water droplets near the edges of the tipi, you cannot utilize the whole space to the max.  The person who sleeps closer to the edge will definitely get the friendly bugs and probably some rain water on them.

It was a good weather to test out how the tipi works under the rain.  Maybe the one we stayed in was not well made, we noticed the overlap between the top rain canvas and the bottom rain canvas was not extended far enough so that the rain water leaked in.

So, what is the pros and cons of staying in a tipi compare to a tent?  By now, you would probably know how to draw the conclusion.  Click here to learn more. 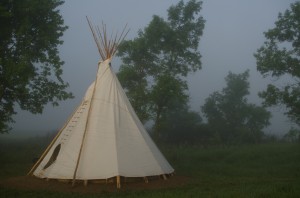 Our Tipi @ Blue Mounds State Park on one misty morning by the lake. 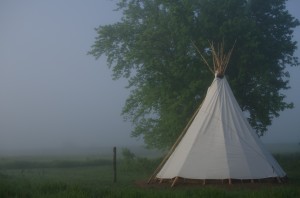 Our Tipi @ Blue Mounds State Park from different angle on one misty morning by the lake.

← How To Prepare Your Gear for High Altitude Trekking – Part 6
Tipi – Part 2: Modern and Ancient Tipi, Pros and Cons →